I'm so excited because we just ordered a new car seat for Myer, and we found the perfect solution for our Honda Element dilemma.

I love my Element. It is roomy and wonderful and the easy-clean floors are perfect for having kids. But there's one problem. The back seats are set so far back, it makes rear-facing car seats nearly impossible to load baby into. (And out of.) 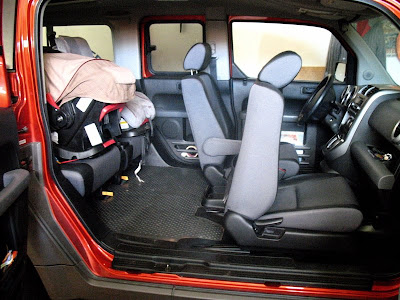 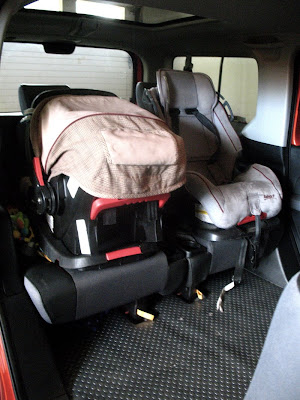 Right now, Myer is in an infant seat that detaches from its base. This has been GREAT because I can just pull the seat from the base and set it on the floor of the Element to get him out. Like this: 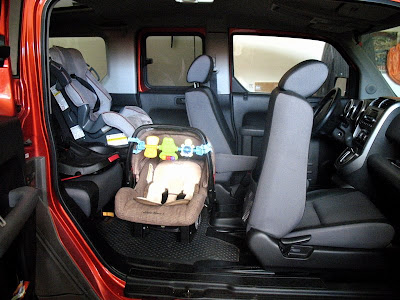 It's the perfect height. This has been awesome for me because I use my sling rather than a stroller, so I have just been able to pop his seat out the base, set it down on the floor, unbuckle him, and throw him in the sling and go. When I come back to my car, the seat is sitting there waiting for me to put him back in. Easy Breezy.

However, Myer is now much too heavy for me to carry around in the infant seat, plus the airline lost the LATCH strap for the base, and that car seat is old and a piece of it has been recalled, so it is definitely time for an upgrade.

We obviously wanted to get a convertible seat, since babies are only in the infant seats until they are one year old. For us, this means no more detaching carrier, though, so I can no longer set it on the floor of the car to load and unload Myer.

Enter the Combi Zeus. It's a car seat that rotates 360 degrees on a solitary base for easy loading/unloading. It's convertible, so when your child is big enough to switch to a forward facing car seat, you just turn it on it's base and you're good to go. 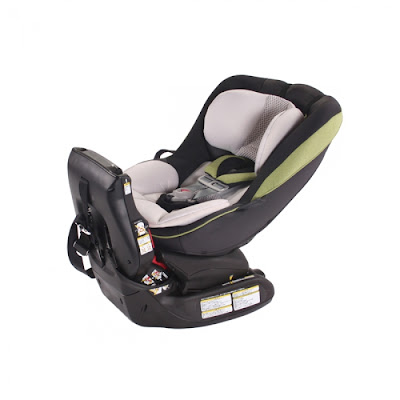 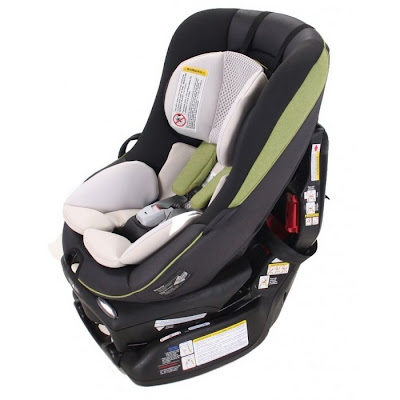 I haven't received the seat yet, (I'll write more once I do) but I can see how the rotating feature will be great while Myer is still rear-facing. I will be able to get him in and out easily and even flip him around while we're parked if he's fussy or needs something.

That sounds brilliant! I wonder if the person who invented it had an Element...

I also have a Honda Element- love it- but I too have to take the whole infant seat out when loading/unloading. I have 14 week old twins and they have been ity-bity, but they are growing. It's getting harder to lug around the seats. I think I'll have to look into other seats too...

So Smart! I just might have to get one for my ever growing 5 month old!

I only wish that you could leave this seat rear facing for longer than just 22 pounds! It's such a great concept. My son is 9 months and just shy of 22 pounds. I'd love to keep him rear facing for as long as possible (since it's the safest for the baby). We've been using a convertible car seat in rear facing position for about a month now, but it is a pain to get him in and out of the Element. sigh. I guess I just need to accept safety over convenience.

Thank you so much for your solution. I am thinking about getting an element and we are expecting a baby in November so my main concern was the carseat issue. Once again thank you and you have been most helpful.

I've been doing that as well, figured it out right away.

Element is great and versatile. Also great for a dog, because the dog can sit between the front and rear seat on the floor.

I recommend using one of those $15 roll-out carpets you find at Walmart, for on the floor. When it's wet outside, you end up tracking water in, and it doesn't get absorbed by anything, things remain slippery. Especially loading and unloading children.
A carpet absorbs that. Also prevents floor from getting scratched.

Hello all. I am a design student studying in the UK. I have been thinking up concept just like the Zeus Turn. (link: http://www.combi-intl.com/Products/Item.aspx?Item=13&Color=27) Does anybody have any negative comments on this product? What would make it better? I have no children of my own so I have little experience of looking after them so need advice on a product which would make things easier for you.
Would it be easy to have a car seat like the ‘Zeus Turn’ which could also work by clipping into a pram/buggy or a high chair?? Any other suggestion please let me know.
Cheers
Oliver Tindal
O_tindal@live.co.uk

Hi there, just wanted to note that the Alpha Omega Elite that you have forward-facing has a weird rule--the topmost headrest setting is for booster mode only; it's not reinforced for use with the harness and in a crash the straps will rip right through. If you turn the seat around you'll see it stamped into the plastic. They get outgrown really early and it looks like you need a new seat!

Still, I wasn't aware of the headrest rule... I will keep it in mind if we use this seat for my younger son, thank you!

thanks for posting this. we have an element, too. and baby #2 on the way. my daughter is forward facing in her britax decathlon. i also detest infant carriers... so... i was thinking of getting the combi cocorro, but i think getting the baby in and out will be a nightmare. it's nice to see how the zeus fits in an element!

Thanks so much for posting this or I never would have found this wonderful carseat. I too have an Element and it is horrid trying to use the infant carseat and lift it in and out. I only have one concern, How do you use a mirror to see your child when rear-facing?? The seat really is HUGE! Thanks!!!

wow never knew how spacious the honda element was. but anyways the Zeus is awesome. performs very well. and safety features are great. very convenient for child and parents.

It can be an absolute nightmare to get your kid into a rear facing seat in the Element. The detachable infant seat is definitely the way to go if your child will still fit in it. Mine didn't, so we settled on a method of climbing in from the other side of the car. The Element has plenty of room, so it's not as bad as it sounds. Much less likely to bonk a head (theirs or mine) that way.

The Element has been an absolutely wonderful kid and stuff hauler for us. It's more functional than plush (noisy and rough ride), but with two messy boys, it's been near perfect. The plastic floors and stainproof fabrics have survived everything they've thrown at it. AWD is great on the ice. MPG at 22-26 is better than a minivan or most SUVs. Footprint and turning radius is small, so it's decent in the city or a parking lot.

Only downside is the lack of a middle seat in the second row (the Element will ONLY seat four). It means we need to take two cars if we have company to haul.

Hello ! We own two Honda Elements and have a Combi Zeus as well. I love the functionality of the Element - we do a lot of mountain bike racing and the Element is great to sleep in and I can fit my bike inside without removing the wheels (small frame)...but, on to my question. "Anonymous" posted a question on 03/11/2010 concerning the mirror issue. I have my Zeus installed on the passenger side rear our baby girl is 3 weeks old, but I cannot see the baby through the mirror I installed for the car seat because of the tether we have attached to the top of the back of the hatch.
My question is...Do you have yours installed similarly? Or what have you done to be able to view the car seat fully when in the rear facing position?
I have been going crazy trying to rig different mirror positions and just can't seem to make it work. Your help/suggestions would be greatly appreciated!

I am ready to sell my Element, and I don't want to! With two dogs who love to swim, it is the best car out there.
Now I have a beautiful five month old and I just recently started putting him in his new rear facing seat. It is painful to say the least.
I was very excited when I found this tonight. However, it looks as if the Zeus is not sold in Canada, and it not approved in Canada. Has anyone from Canada ordered one from the US?

I was wondering if you are still using your Combi Zeus in your Element or if not how long you used it? My son is 4 mo old but tall and will be out of his infant seat sooner than I can imagine and I wanted to find a seat that works in the element. TIA!

I followed your advice and could not be happier with the Combi Zeus! The car seat installation inspector thought it was clever to have especially with this car. Thank you so much!!!!!

Nice post with great details. I really appreciate you for sharing this information with us through this blog. Thanks for sharing. affordable houston user cars

Hi there, Element owners! I realize this is an old post and I might not get a response but: here we are in 2014 and the Combi Zeus has been discontinued. I've read a ton of bad reviews about the Orbit car seats, and there are currently no other rear-facing, rotating car seats (that I can find) sold in the US.

Any advice about what to do for a good Element car seat now? We take a ton of long road trips and I'm agonizing over how to make it work in the least painful way possible.

Also realize this is an older post, but just have to say...
The Element is great for older kids and is a really fun car HOWEVER I have an 11 month old and am expecting another bundle very soon. With one car seat in reverse mode and having to climb in through the other side to get my 11 month old in, I have no idea how I'm going to manage that while super preggo AND when the new baby is here, how I'll manage with another car seat. Lastly, getting in and out with a small child if you are parked in a smaller parking space is TERRIBLE and I would NEVER recommend the Element to parents who have children under 2.

Does the Element have anchors that can be used with a child seat instead of securing a seat with only seatbelts?

Thanks for your good article admin,
here my new article car seat stroller thanks again

I have read your article, it is very informative and helpful for me.I admire the valuable information you offer in your articles. Thanks for posting it.. παιδικο καθισμα αυτοκινητου

Thanks for sharing this information. I really enjoyed the way you presented this. Keep up the good work.
sawyers chevrolet

Emery Jo
Oklahoma City
I am a young musical mother who is trying to pin down what I know of life, parenting, grace, and the on-going battle to hear the beep! beeping! of my little heart in the midst of all the chaos. Key Players in my story: Ezra James, he's a sage old 6, Myer Elliot, the 2 year old sweetness, Truman Arthur, the oh-so-serious faced baby bean, and my husband, Chris, who could make even the hardest of hearts swoon. Thanks for reading along!

This is a Flickr badge showing public photos and videos from emeryjo. Make your own badge here. 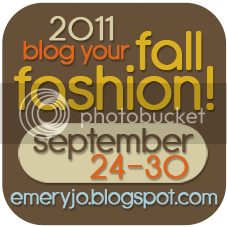 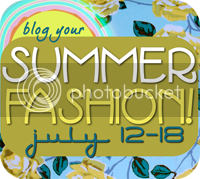 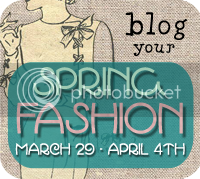 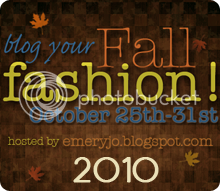 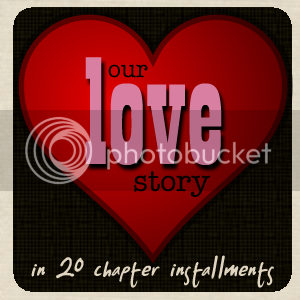 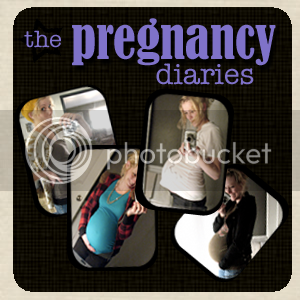 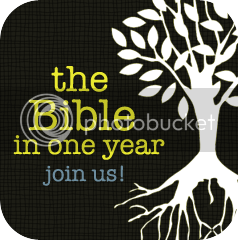